This page discusses the system memory default allocation for use by the ARM and DSP processors and tips for potential custom modifications for this allocation.

The DSP processor needs memory for running the DSP code and communications with the ARM processor. By default this is allocated to be 32 MB of the available 128 MB. 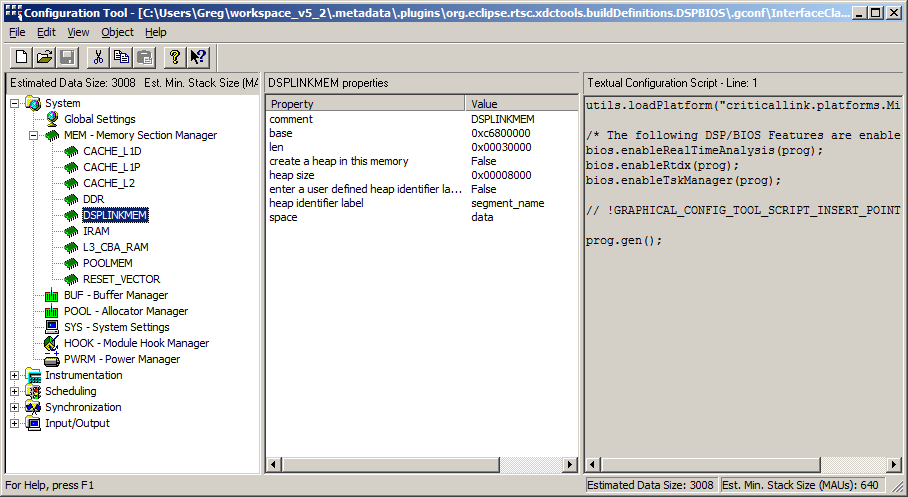 Note that all of the memory sections defined are not necessarily located in DDR (which spans address 0xC0000000-0xC8000000).

It is possible to redefine the system memory partitions for a MityDSP-L138. However, keep in mind that you should only do this if it is absolutely required for your project and you have a good idea of what you are changing and why.

Below are some tips for choosing custom memory allocations.

Choosing a Custom Memory Allocation for the ARM¶

Utilities such as top can be helpful in getting and idea for how close you are to using the memory you have available.

Keep in mind that if the system runs out of memory, allocation requests will start returning NULL and could result in confusing kernel panics and system crashes.

Choosing a Custom Memory Allocation for the DSP¶

Aside from room that your code will need to run (denoted as DDR), the DSP typically allocates a sections of memory called DSPLINKMEM and POOLMEM. This is memory used by DSPLink, which is the interface by which the DSP and ARM communicate.

There are three places where adjustments to the system memory partition must be made.

The U-Boot environment variable "bootargs" has a parameter that we typically set as "mem=96M." This tells the kernel that there are 96 MB for use by the ARM. This number must be changed if a different memory allocation is going to be used for the ARM.

As insinuated earlier the .tcf file in the DSP side project contains the memory partitions used by the DSP. This file must be updated with the newly desired system partitions.

The ARM is the master responsible for loading the DSP. When a different memory allocation is specified in the DSP, it must also be mirrored in the ARM.

This is done by defining a tsSharedMemCfg structure, filling it in and passing it into the DspApp class via the SetSharedMemCfg() function before call the LoadApp() function. See the example code below for details: