Programming the FPGA Through U-Boot¶

The Critical Link port of the uBoot bootloader for the MitySOM-AM57x includes support for programming the FPGA using a generated binary image of the bitstream.

Critical Link recommends users plan to load the FPGA during the uBoot phase, prior to loading linux. This is especially important for users wishing to leverage the PCIe interconnect between the FPGA and the AM57xx processor.

When the MitySOM-AM57xx is powered on, the FPGA will not be programmed. The FPGA DONE LED will be off (the only LED lit will be the power good LED) as shown in the picture below. Note: the pictures shows a JTAG debugging pod connected, the pod is not required to program the FPGA from uBoot. 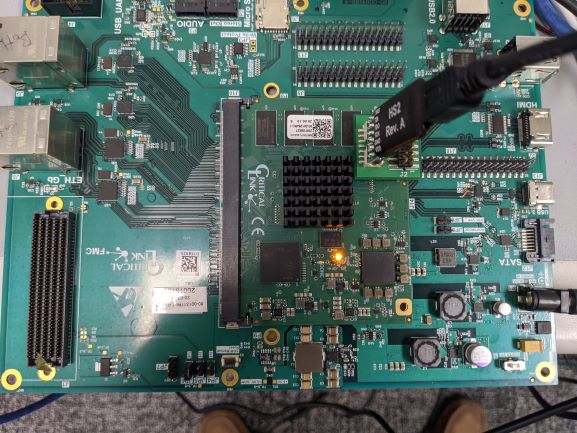 In order to load the FPGA, the bitstream should be loaded into memory, then transferred to the FPGA use the "fpga" uBoot command. The following commands show an example of loading the FPGA:

These commands will load the devkit.bin FPGA bitstream from the first FAT partition on the MMC card into RAM address 0x82000000 and then transfer them into the FPGA.

If the bitstream load is successful, you should see the FPGA DONE LED light as shown in the figure. 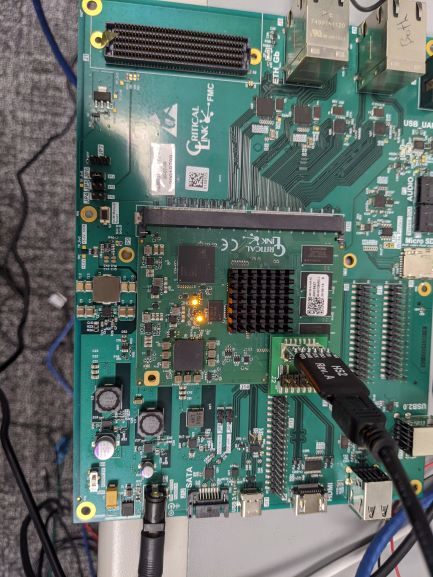